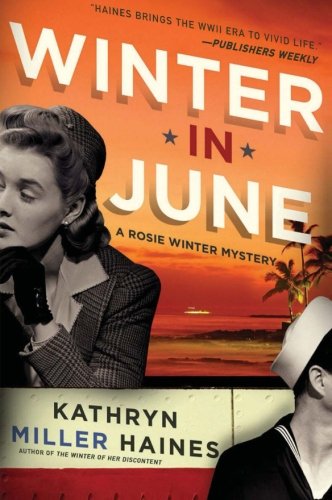 Actress Rosie Winter, the narrator of Haines’s lively third WWII-era mystery (after 2008’s ), sets sail from San Francisco for the Solomon Islands in the spring of 1943, though a woman’s body found floating in the water nearby delays the ship’s departure. Rosie, whose ex-boyfriend is missing somewhere in the Pacific theater, is part of a USO troupe that includes adventurous friend Jayne Hamilton, who’s walking away from her mobster boyfriend, and Gilda DeVane, a former MGM player. Once on the island of Tulagi, Rosie and her pals mostly have fun performing their song-and-dance routines and consorting with friendly servicemen, until a deadly sniper attack prompts the military authorities to move the entertainers to WAAC barracks for their protection. Full of evocative period detail (a sailor is called Spanky after the kid in the comedies), this entry, for all its humorous and lighthearted moments, builds to a dramatic and sobering conclusion.