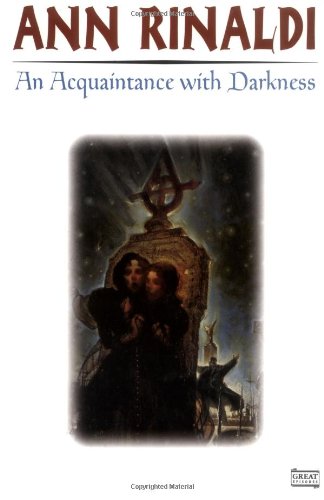 An Acquaintance with Darkness

Rinaldi's (The Second Bend in the River) latest excursion into American history is set at the close of the Civil War and focuses on the struggles doctors faced in obtaining cadavers to do research. As her readers will expect, the plot is fast-paced and dramatic, with a wealth of interesting background information. The main character, 14-year-old Emily Pigbush, has a crush on neighbor Johnny Surratt, one of the men accused of abetting John Wilkes Booth in President Lincoln's assassination. During the course of the book, Emily loses her mother to consumption (her father has died in the war) and sees the Surratt family torn apart (Johnny flees to Canada, his mother is thrown in jail and eventually hanged as an accomplice). Her uncle, a well-respected doctor, is suspected of body-snatching, and her countrymen turn into rabble-rousers thirsty for blood and money. Predisposed against her uncle by her mother's mistrust of him, Emily discovers that he has lied to her repeatedly and may be breaking the law to do his work. Rinaldi's research is impressive, and readers will appreciate her afterword describing how she has melded fact and fiction. Nevertheless, some of the moral ambiguities here, e.g., whether or not the lies Emily's uncle tells her are justified, may be disturbing. In the end, Emily finds self-esteem and acceptance in her uncle's household only when she proves that she can aid in the body-snatching activities herself and chooses to look beyond the lies he has told her. Ages 12-up. (Aug.)
close
Details