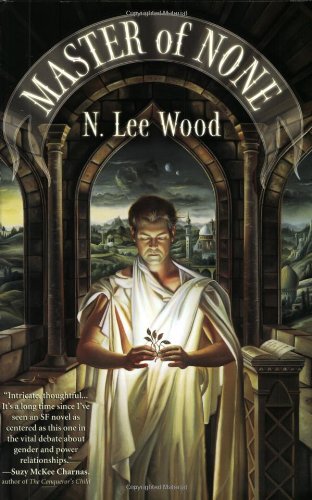 Vanar, newcomer Wood's intricately imagined closed matriarchal world where men have no legal rights, dominates this far-future exploration of gender, linguistics, justice, greed and malice. Vanar's nine High Families control all intersystem travel between 300 Hengeli-settled worlds through their mysterious female-only Pilots. Marooned after attempting to steal botanical specimens from Vanar, Hengeli Nathan Crewe finds himself totally at the mercy of Yaenida, ancient matriarch of the Nga'esha clan, perhaps the most powerful woman in the known worlds. As he agonizes with Vanar's ferociously difficult language and its alien culture (the individual's welfare always loses to the good of the community), Crewe is caught in a power struggle between the Nga'esha and their Changriti rivals. Against all odds he maintains his identity, uncovers ancient wrongs and forces essential 4changes in Vanar's social structure, created when its original female settlers reshaped their language as they reshaped themselves. Brilliantly executed conflicts with intensely powerful characterizations and sensitive handling of controversial issues of sexuality flesh out disturbing challenges to conventional male-female relations as well as to accepted governmental structures. Like her literary ancestors Cherryh and Le Guin, Wood employs linguistic expertise to produce uncanny verisimilitude in a society that turns accepted behavioral norms inside out in a stunning bravura portrayal of human adaptability. (