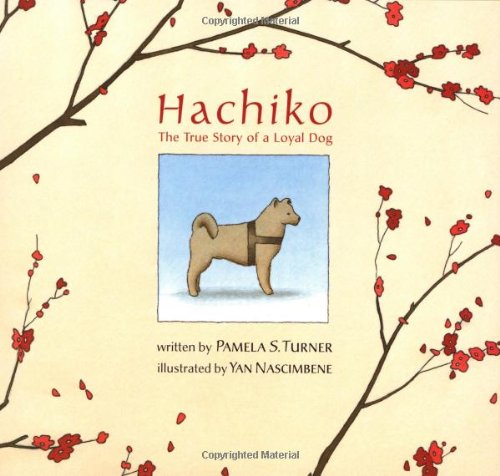 HACHIKO: The True Story of a Loyal Dog

Every child in Japan knows the story of Hachiko, the dog who waited at a Tokyo train station to greet his owner each afternoon and who, after his owner's sudden death, continued to wait for him at the station until his own death 10 years later, in 1935 (a statue of Hachiko is now a famous Tokyo meeting place). First-time author Turner retells Hachiko's story in the voice of Kentaro, a fictitious six-year-old. Nascimbene ( ) tints the pale skies of his watercolors after the manner of Japanese woodblocks. The tone of his compositions range from humor (Kentaro hides behind his kimono-wearing mother) to pathos (scattered bouquets litter the station in honor of the loyal dog, after his death). As Hachiko keeps vigil for his dead master, Dr. Ueno, Kentaro asks Dr. Ueno's gardener the question that readers will also be pondering: does Hachiko realize that Dr. Ueno is dead? "Perhaps he still hopes that Dr. Ueno will return someday," the gardener replies. "Or perhaps he knows Dr. Ueno is dead, but he waits at the station to honor his master's memory." Turner's foreshortened rendition tends to invest the most drama in the moments of death and grieving ("One chilly morning I woke to the sound of Mama crying"); the blander passages relating Hachiko's constancy might not make enough of an impact on younger readers. Ages 4-8.