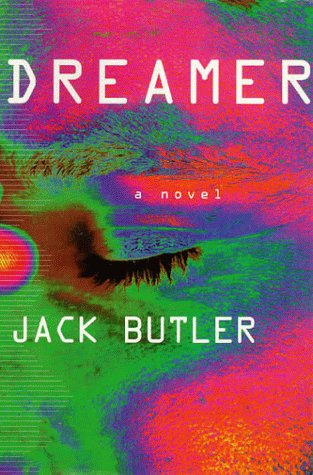 Butler, director of creative writing at the College of Santa Fe, is about as creative as a writer can be. In the past 18 years, he's published two volumes of poems, one of stories, a cookbook and three novels--a coming-of-age tale (Jujitsu for Christ), a futuristic vampire yarn set on Mars (Nightshade) and a Southern gothic narrated by the Holy Ghost (Living in Little Rock with Miss Little Rock). His highly original new novel is a densely textured tale of suspense that, like his entire career, features a scintillating mix of approaches. It also sometimes substitutes dazzle for illumination. Set in a Santa Fe that Butler captures as tightly as a leaf pressed between pages, the story follows the adventures of Jody Nightwood, a dream researcher whose work is targeted by rival CIA subgroups--one that wants to adapt her findings for its AI research and another that will kill her, if necessary, to prevent that. Butler unspools the plot line in staccato fashion, looping it into unexpected swirls and knots: lengthy descriptions of Jody's dreams vie with narrative sidetracks (a poetry reading, a dinner party) aimed at skewering this literary movement or elaborating that scientific theory. Eccentric characters crowd the book, such as the ""bum"" toiling on ""A Theoretical Model of Heaven""; a cop of Indian descent who's also a shaman, a secret agent and an assassin; Jody's new love, who's partly modeled on the vampiric protagonist of Nightshade. The novel reads like a dream, in fact, intensely vivid, brimming with portent, serendipity and meaning. But it's as discursive and confusing as a dream, subordinating classic thriller elements to a semi-associational flow of events. Despite brilliant writing, the narrative loses suspense and, occasionally, leaves readers feeling as disoriented as the beleaguered Jody when her lab and home are broken into and bodies accumulate around her. (June)
close
Details