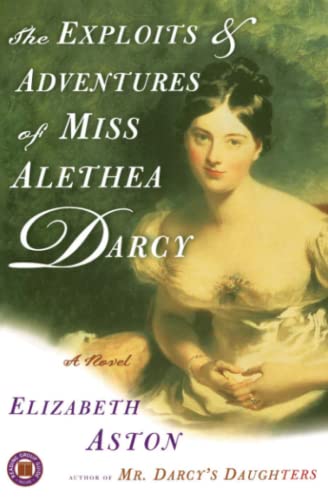 In this delightful new chapter in the story of the Darcy clan, taken up by Ashton ( ) where Austen left off, the youngest daughter of Elizabeth Bennett and Mr. Darcy is in a pickle. Having married in haste, Alethea is now repenting bitterly, languishing under the unspeakable treatment of her horrid husband, Norris Napier. She escapes in the company of her intrepid maid, Figgins, and dressed as young men, they hare off to Europe to find Alethea's favorite and most sympathetic sister, Camilla. On the way, unbeknownst to them, they are found out by Mr. Titus Manningtree, who's off to Europe to find a Titian painting of his father's that has gone astray. Appalled by Alethea's apparent total disregard for her position and the requirements of polite society, Titus is nonetheless impressed by her courage and pluck. At first out of duty and then out of interest, he comes to her aid time and again, seeing her safe back to England. Once there, however, it is discovered that her husband was murdered, and she comes under suspicion. Both Titus and Alethea are captivating, and the quality of the characterizations saves the book from the plot confusions, too-easy tieups and too-modern sensibility that plague it.