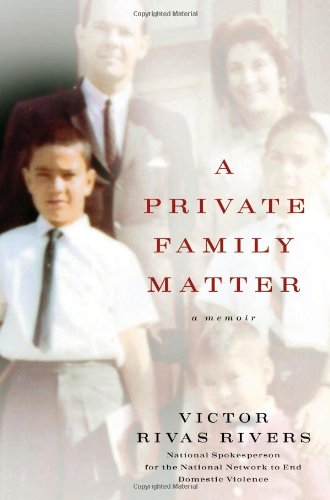 A PRIVATE FAMILY MATTER: A Memoir

Rivers's childhood toy, a broken GI Joe action figure, spoke only one phrase: "I've got a tough assignment." The author, an advocate against domestic violence, took on this motto early in life to help himself endure the "war zone" of his upbringing. His story starts in Cuba, where his mother's "gift of sight" didn't help her see through the seductive elegance of Tony Rivas, nephew of Batista's minister of agriculture. As Rivers tells it, his mother's natural radiance was soon beaten down by her demanding, jealous and moody husband. The family moved to Chicago to escape Castro, yet young Victor could not escape his father, who began beating him when he was only 15 months old. An imaginative child, Rivers steeled himself against brutal whippings by emulating tigers, "tensed and ready to pounce or flee at all times." By the time Rivers was 15, he fought back, throwing Rivas to the floor. But when the older man returned with a knife and, experiencing deep feelings of guilt, yelled, "Kill me!" Rivers ran away. Helped by a series of "angels"—a schoolmate's lawyer father, supportive teachers and coaches, a family that informally adopted him, and his own brothers—Rivers overcame his rage and self-loathing. He tells this inspiring story of emergence from isolation and despair into love and community with passion, optimism and tenderness. Photos.