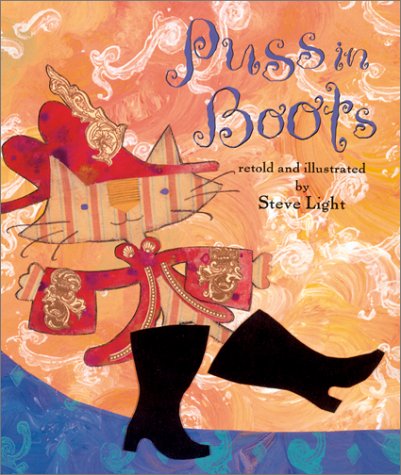 In his first book, Light retells this Charles Perrault classic with a wry touch and embellishes his narrative with stylized collages. His concluding note explains that the art was inspired by the work of French Rococo artists, especially that of Jean-Honoré Fragonard, as well as by French decorative wallpapers. The hand-stamped paper featuring various patterns at times competes with the compositions, rather than enhancing them (especially when a similar pattern appears in the sky and on the walls of the king's palace). But more often, the patterns' designs and elegant palettes give these pages a sophistication that the artist offsets, quite creatively, with childlike renderings of faces or figures in geometric shapes (especially that of the ogre, which keeps the fright to a safe minimum). Befitting his starring role, the clever title character steals the spotlight visually: her image is shaped from a striped French provincial fabric, her jacket and hat are cut from a bold, vermilion pattern and her prominent, oversize boots stand out as the only shock of black in the pictures. Though Light pares the narrative to a minimal length, a small type size and relatively complex vocabulary recommend this as a read-aloud or for more experienced readers. A noteworthy debut. Ages 3-6.