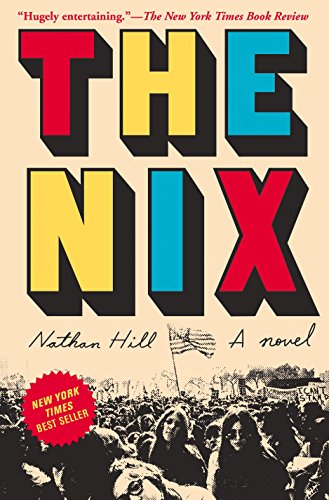 Hill’s first novel offers an ironic view of 21st-century elections, education, pop culture, and marketing, with flashbacks to 1988, 1968, and 1944. The action begins in 2011, when Samuel Anderson, an English professor who prefers playing World of Elfquest online to teaching Hamlet to college students, learns that Faye, the mother who abandoned him when he was 11, has been arrested for throwing stones at flamboyant ultraconservative presidential candidate Sheldon Packer. News media repeatedly show Faye’s photo from her young hippie days along with a video of the attack. In an attempt to help his mother and himself, Samuel digs into Faye’s past, focusing on the Iowa town where she grew up and 1968 Chicago, where she unwittingly became caught between protesters and police. Samuel’s search—with assistance from Pwnage, an Elfquest savant—uncovers a judge with a 50-year-old grudge, a grandfather with a 70-year-old secret, and a world where the official story and the truth often diverge. The Nix of Hill’s title is a Norwegian mythological being that carries loved ones away, a physical and metaphorical representation of fear and loss, much like the Under Toad in John Irving’s The World According to Garp. Like Irving, Hill skillfully blends humor and darkness, imagery and observation. He also excels at describing technology, addiction, cultural milestones, and childhood ordeals. Cameos by Allen Ginsberg, Walter Cronkite, and Hubert Humphrey add heart and perspective to this rich, lively take on American social conflict, real and invented, over the last half-century. 100,000-copy announced first printing. Agent: Emily Forland, Brandt & Hochman Literary. (Aug.)
close
Details