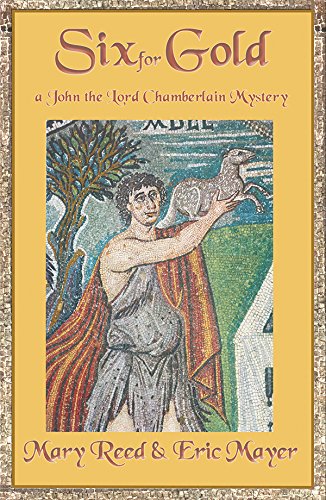 Six for Gold: A John the Eunuch Mystery

Set in plague-ridden sixth-century Constantinople, Reed and Mayer's captivating sixth John the Eunuch novel (after 2004's ) opens dramatically as John, lord chamberlain to Emperor Justinian, flees "excubitors" (i.e., palace guards) in the Hippodrome. Justinian's not-so-nice wife, Theodora, wants John prosecuted for a senator's murder, but the emperor has other ideas and spirits him away to the oasis town of Mehenopolis, Egypt, to look into a strange case of suicidal sheep. John soon suspects a link with another investigation for the emperor involving a valuable religious artifact. Filled with quirky characters, including a bee seller and a magician, this fresh entry with its intriguing details of Egyptian culture reveals further depths to the most clever John and his family members. A helpful glossary rounds out the book.