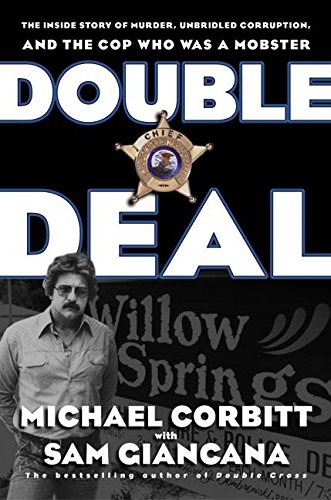 DOUBLE DEAL: The Inside Story of a Murder, Unbridled Corruption, and the Cop Who Was a Monster

This is a fast-paced inside look at the workings of the Chicago-based organized crime syndicate and its national and international dealings, by a highly decorated former Illinois police officer who spent his entire law enforcement career working for the Mob. Co-author Giancana covered much of the same territory in , his bestselling look at the U.S. Mafia, but here his obvious model is Nicholas Pileggi's , the classic insider look at the New York crime world through the words of ex-mobster Henry Hill. Surprisingly, Corbitt's story compares favorably to that earlier classic true crime tale as he narrates his rise from the ranks of an average Chicago gang to being a player with the likes of Sam "Momo" Giancana (his co-author's uncle) and Tony Accardo—perhaps the two most important figures in the history of post–WWII Chicago crime. Giancana captures Corbitt's eye for the sleazy details of Mob life, such as the time he sees "half a million in loose diamonds" wrapped in a brown paper bag on the front seat of Momo's car, "looking like a ham sandwich." But the heart of the book is Corbitt's description of the mysterious figure of Hy Larner, who, along with Meyer Lansky, controlled organized crime in the U.S. in the 1970s and 1980s. Corbitt's first-hand accounts of Larner's dealings with shady figures like Lansky, the Shah of Iran and Manuel Noriega, as well as with agents of the Israeli government, the Mossad and the CIA, provide some new evidence of the extent of organized crime's involvement with the government.