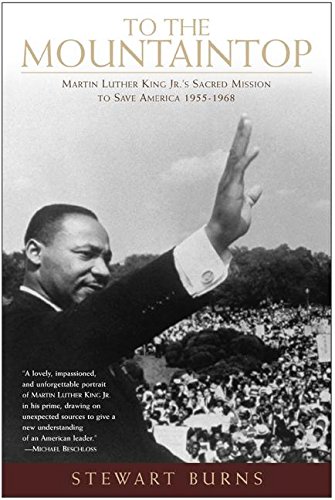 TO THE MOUNTAINTOP: Martin Luther King Jr.'s Sacred Mission to Save America 1955–1968

Drawing on oral histories, documents and major world events, this intimate new biography chronicles the civil rights leader's struggles with faith and leadership from his days as a novice minister until his assassination in 1968. Burns, the former editor of the King Papers Project at Stanford, asserts that King often saw himself as an unworthy Moses and increasingly drew upon his biblical faith to shape his role in the nonviolence movement. Burns also examines the influence of notable figures on King's life, from Bayard Rustin and Malcolm X to Gandhi and Robert F. Kennedy. Without ever resorting to deification or criticism, he quotes from King's public conversations and speeches, then presents the man's private doubts on everything from LBJ's war against poverty to the Nation of Islam movement, many of which are culled from interviews with Coretta Scott King, Rustin and other trusted advisers. Pivotal events like the Montgomery bus boycott, the Vietnam War and the March on Washington are brought alive through narratives that show their impact on King's path of righteousness. Burns's` ear for dialogue and attention to details—the shiny green Chevy King's parents bought him upon graduation from divinity school, the arduous shaving process often blamed for his tardiness—help keep the book from spiraling into dry textbook formula. It's a thought-provoking examination of the inner struggles of a widely covered public figure, and its thorough research and insights should help it stand out among the slew of other King biographies on the shelves.