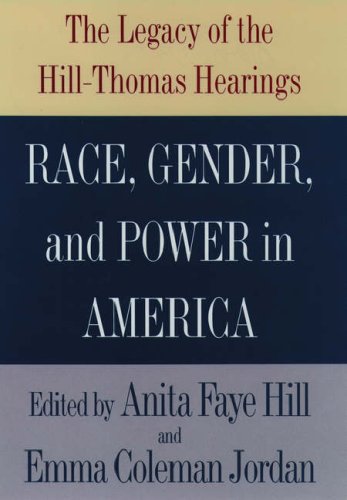 Race, Gender, and Power in America: The Legacy of the Hill-Thomas Hearings

In the aftermath of the Anita Hill-Clarence Thomas hearings, this book of 12 essays examines the political, legal, and social consequences of that controversial event. Half of the authors are lawyers and most are African Americans; many actively supported Hill during the hearings. Topics include a history of lynching of black Americans (both men and women), a history of African American slavery, the sexual rape of black women, stereotypes of black women, and effects of marriage and patronage on black women's empowerment. Of particular interest is Orlando Patterson's essay on gender relations among African Americans, in which he describes the ""cool pose"" masculinity of lower-class black males, which is used to denigrate black females. These essays aim to open discussion of gendered power struggles among blacks. Hill, author of the essay on marriage, patronage, and empowerment, takes a step away from the safety of conservatism as she questions stereotypic responses to black women. Unlike African American Women Speak Out on Anita Hill-Clarence Thomas (LJ 7/95), this volume includes men in the dialog. Recommended for academic collections.--Paula N. Arnold, Vermont Coll. Lib., Norwich Univ., Montpelier
close
Details