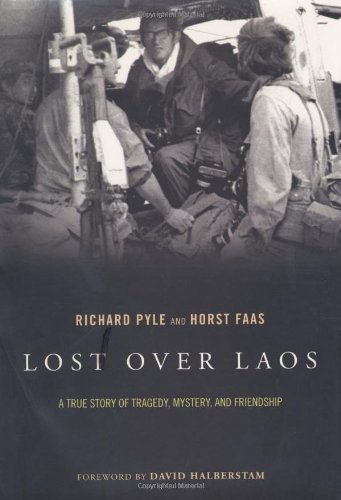 LOST OVER LAOS: A True Story of Tragedy, Mystery, and Friendship

This deeply moving and personal recollection of the lives and work of the only four combat journalists killed during the 1971 U.S. invasion of Laos is an excellent short history of an important part of the Vietnam War as well as a fascinating insiders' look at the rugged life of civilian photographers during wartime. Former Saigon bureau chief Pyle () and Pulitzer Prize–winning photographer Faas () worked together for the Associated Press in Vietnam and were close friends with the men who died, which adds depth to their biographies: Larry Burrows, whose famous work for magazine made his name "the most closely identified with pictures of armed conflict in Indochina;" the Vietnamese-born Henri Huet, whose work earned the Overseas Press Club's Robert Capa Award; the passionate young Kent Potter, who threatened the United Press International "to resign if forced to leave the war zone;" and Keisaburo Shimamoto, a seasoned Vietnam correspondent with the "high-powered" French agency Gamma who had just returned for his third tour of Vietnam as a freelancer. Pyle provides an excellent look at the history of North Vietnam's use of Laos for its Ho Chi Minh Trail to arm its soldiers in South Vietnam, and he shows how its success provoked President Nixon's invasion of both Laos and Cambodia. Most moving is Pyle's account of how he and Faas returned to Laos 27 years later to search for—and successfully find—the wreckage of the dead journalists' helicopter, along with some of their personal and photographic effects, a journey that becomes a tribute to every journalist who covered the Vietnam War.