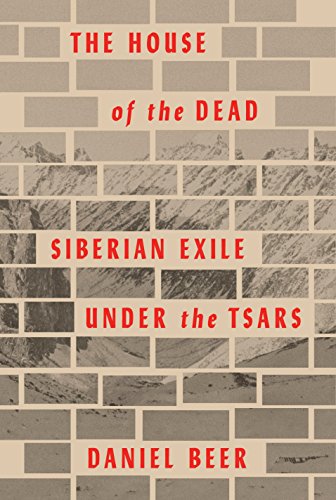 The House of the Dead: Siberian Exile Under the Tsars

In this meticulously researched and often enlightening account, Beer (Renovating Russia), senior lecturer in history at Royal Holloway, University of London, shows that populating and cultivating the resource-rich expanse east of the Ural Mountains was a test that the czars failed spectacularly. As early as the 17th century, Russian peasants, soldiers, and officials began to settle Siberia, soon joined by exiles “in ever greater numbers.” Throughout the 18th and 19th centuries, the state banished people deemed “harmful agents” to serve prison sentences, perform hard labor, or settle permanently in what became Russia’s “Wild East.” Thrown together in grueling convoys, deteriorating way stations, and hellish mines were minor offenders, hardened criminals, and generations of revolutionaries for whom Siberia was both a punishment and a chance to test and spread revolutionary ideas. Beer details the systemic incompetence of the penal administration and the brutal physical punishments inflicted on exiles, as well as the violence that escaped convicts unleashed on the indigenous population. Loosely organized and often repetitive, Beer’s history is nevertheless dense with memorable anecdotes and images, including a hillside of empty graves dug to serve a penal colony. As Beer demonstrates, the Russian empire’s grand ambitions for Siberia, like those graves, “sank into the earth without a trace.” Illus. Agent: Michael V. Carlisle, InkWell. (Jan.)
close
Details