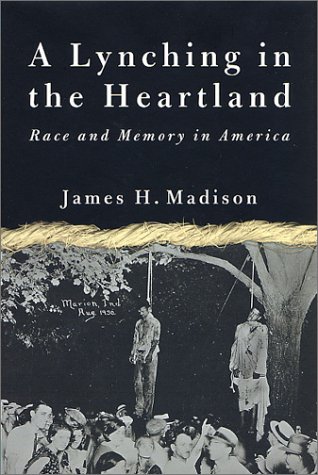 A LYNCHING IN THE HEARTLAND: Race and Memory in America

The jacket photograph is chilling: the bloody bodies of two African-American young men hang from a tree while a crowd of white men and women mills below, dressed as if attending a parade or political rally, gawking and pointing. In this heartfelt and wide-ranging study of this tragedy, Madison explores the events of August 7, 1930, in the small town of Marion, Ind. The two men—along with a third, who narrowly escaped—were in jail on charges of murdering a white man and raping a white woman when a white mob stormed the jail and hung the two men from a tree outside the nearby courthouse. But Madison (a historian at Indiana University) moves beyond these stomach-churning facts, scrutinizing racial dynamics in Marion in the decades both before and after the lynching. Race was so etched into the minds of white residents that it even followed heroes into death: on a local memorial for World War I soldiers, the names of two of the dead are followed by "(col.)" for "colored." Madison probes how the lynching became a subtext in later years, including in the integration of the town swimming pool in 1954. Only recently, Madison says, has Marion come to terms with its past: the survivor of the lynching was awarded the keys to the city in 1993, and an African-American was finally elected sheriff in 1998. As passionate as it is disturbing, Madison's book is a dire reminder of the horrors the American heartland held for the dispossessed.