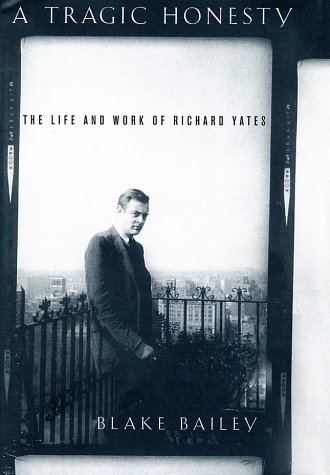 A TRAGIC HONESTY: The Life and Work of Richard Yates

Richard Yates's most famous novel, , set the tone for most of his later fiction: it was, for biographer Bailey, a thinly veiled depiction of Yates (1926–1992) and his immediate surroundings, in many cases with the names barely changed, and was widely praised at the time of its release only to fade into semi-obscurity except for a small group of devotees. Bailey's () massive biography strip-mines Yates's fiction for details of his life; on more than one occasion, the abundance of story elements with real-life parallels is used to suggest that another element, such as the protagonist's affair with a prostitute in the short story "Liars in Love," might also have some basis in fact. These conjectures are offset by extensive interviews with surviving family and acquaintances. At times the sheer amount of information can be overwhelming, in part because the reader is subject to an unrelenting depiction of Yates's life as "a parody of the self-destructive personality." He smoked heavily for decades despite tuberculosis, emphysema and pneumonia, and was often barely able to breathe, and eyewitnesses recall numerous provocative outbursts and emotional breakdowns brought on by the potent combination of manic-depression and alcoholism. And there's the repeated heartache of an author pushing himself time and time again to complete a book, never quite obtaining the success he so desperately wants. Apart from a tendency to throw in disruptive foreshadowing asides, Bailey has done a great job of sorting through the facts of Yates's difficult life, assembling them into a story that mirrors the best of his subject's fiction.