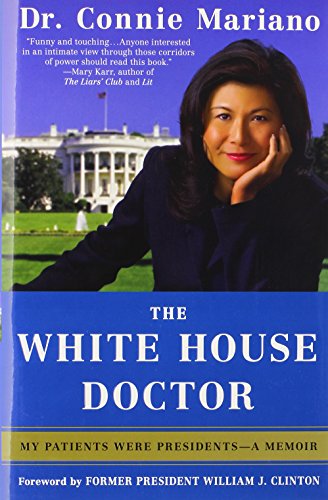 The White House Doctor: My Patients Were Presidents—A Memoir

This doctor is a bit of a celebrity herself: the first military woman in U.S. history to be appointed White House doctor, the first female director of the White House medical unit, and the first Filipino-American to become a navy rear admiral. And though Mariano humbly bows to the bigger-than-life presidents—George H.W. Bush and Bill Clinton—she cared for during eight years in Washington, it's her journey that's so remarkable. Having begun life in 1955 as the daughter of a U.S. Navy steward in the Philippines, she was appointed a White House physician by the navy in 1992, and her mettle was thoroughly tested during medical emergencies—and political storms. Whether helping to treat Bush's skin cancer or dispensing a Band-Aid on the golf course, accompanying the president on overseas trips or performing a Heimlich maneuver on a choking guest at a holiday gala, Mariano always kept her cool and her sense of humor, which she retains in this unusual inside look at the White House. 8 pages of color photos.