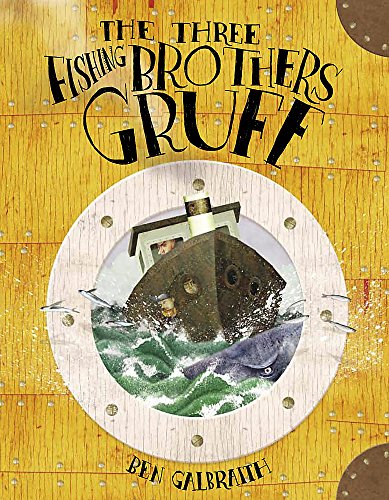 In his first book New Zealander Galbraith puts an eco-twist on the classic goats vs. troll smackdown: the bridge becomes the threatened sea, a guardian Minke Whale replaces the troll, and the three goats become three “mean, prickly-faced” fishermen named Anglo, Anvil and Angora Gruff. Having overfished their own home waters of Poverty Bay, the brothers despoil the nearby Bay of Plenty. Then, in a move straight out of , Minke Whale rams the brothers’ boat, sending all three to a well-deserved briny end. Working very much in the vein of Lane Smith, Galbraith produces a book both visually hip and handsome. His digitally collaged illustrations are marvelously mordant and often ingenious (several pages, for example, feature cleverly incorporated die-cuts). Quirky, hand-press-styled typography and side quips by marine inhabitants add to the urbanity. Unfortunately, the irony and sophistication are strictly for appearances—as a writer, Galbraith lets his earnest environmentalist fervor get between the reader and the story. The ending is positively preachy: “The people of both towns had learnt a lot. No more did they dirty the water with oil or rubbish and they were careful never to be greedy.” But with a little more maturity and seasoning—the book sprang from Galbraith’s senior project at design school—he might turn out a story worthy of his art. Ages 4-up.