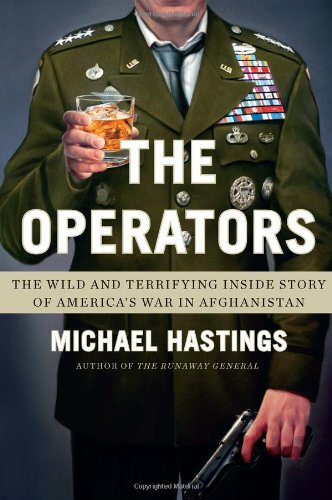 The Operators: The Wild and Terrifying Inside Story of America's War in Afghanistan

Hastings (I Lost My Love in Baghdad: A Modern War Story) recounts the events behind and beyond his award-winning 2010 Rolling Stone article "The Runaway General," which led to the resignation of General Stanley McChrystal and his replacement with General David Petraeus. Trailing McChrystal and his staff as they travel to Paris, Berlin, and Kabul, Hastings discovers how the nation's foremost "operators"—the special forces and other personnel on "the X…the spot on the satellite map where the action [goes] down"—regard the war as secondary to their loyalty to each other. Cavalier remarks about key figures and incidents ranging from the infamous cover-up of the cause of Pat Tillman's death to scenes with President Obama reveal the essential divide between military and civilian perspectives. Hastings brilliantly intertwines narratives, whether writing about the halls of Washington, war-torn Baghdad, or rudimentary lessons in counterinsurgency math, a system wherein killing two of ten results not in eight, but twenty insurgents. Hasting's first-class, engrossing reportage reveals unsettling yet human flaws behind one of recent history's most lionized military figures, and a war which purportedly began as a response to terrorism, but whose aims—in the author's estimation—remain ambiguous. (Jan.)
close
Details