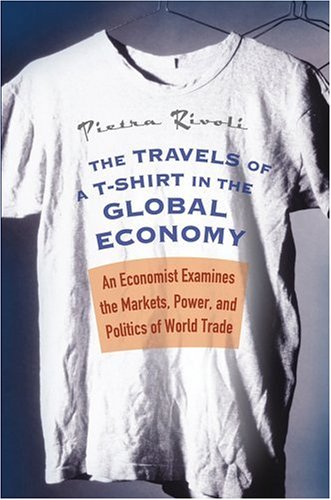 TRAVELS OF A T-SHIRT IN A GLOBAL ECONOMY: An Economist Examines the Markets, Power, and Politics of World Trade

During a 1999 protest of the World Trade Organization, Rivoli, an economics professor at Georgetown, looked on as an activist seized the microphone and demanded, "Who made your T-shirt?" Rivoli determined to find out. She interviewed cotton farmers in Texas, factory workers in China, labor champions in the American South and used-clothing vendors in Tanzania. Problems, Rivoli concludes, arise not with the market, but with the suppression of the market. Subsidized farmers, and manufacturers and importers with tax breaks, she argues, succeed because they avoid the risks and competition of unprotected global trade, which in turn forces poorer countries to lower their prices to below subsistence levels in order to compete. Rivoli seems surprised by her own conclusions, and while some chapters lapse into academic prose and tedious descriptions of bureaucratic maneuvering, her writing is at its best when it considers the social dimensions of a global economy, as in chapters on the social networks of African used-clothing entrepreneurs.

The agent for Stephen Buchmann's (Forecasts, Mar. 7) is Judith Riven.