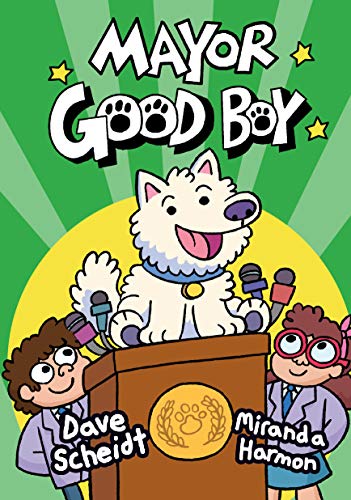 In this graphic novel series opener, a fluffy talking dog and nap aficionado named Good Boy is elected mayor of the town of Greenwood. When a group of constituents, displeased by the election results, start a fracas at Mayor Good Boy’s acceptance speech, quick-thinking Abby Ableman, who is light-skinned and often self-deprecating, and younger brother Aaron, eight (“literally the grossest kid on this planet,” according to their mother), combine their skills to save the day. Along the way, they impress and subsequently land jobs with the new mayor, leading to their involvement in a series of community events—and multiple run-ins with the hound’s top critics. Kid-friendly text by Scheidt (Wrapped Up) uses a comedic style employed with success by Dav Pilkey and Nickelodeon cartoons (“That old guy has a fake butt!”), while art by Harmon (Spring Cakes) gamely mixes cute and mildly disgusting while representing Greenwood’s intersectional diversity. A closing pledge offers tongue-in-cheek suggestions for community engagement (“I will always root for the underdog”), and the mini comic that follows on how to contact one’s elected representatives carries Scheidt’s engaging humor through to the end. Ages 7–10. Agent: Charlie Olsen, InkWell Management. (Aug.)

A previous version of this review misstated the author's last name.