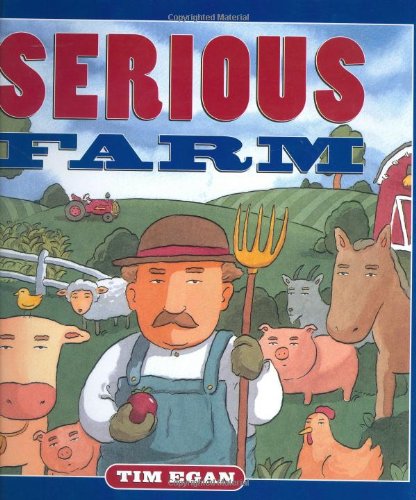 Egan's ( ; ) dignified animal characters tend to meet life's challenges with cool stoicism, despite the occasional urge to act silly. In this dryly funny story, the furred and feathered residents of Farmer Fred's barnyard likewise cultivate a dispassionate attitude: "The pigs, the cows, the horses, the chickens, the rabbit, the sheep. All extremely serious." Everyone, especially Farmer Fred himself, wears the determined, impassive gaze of the morning commuter. So much nonchalance bothers Edna the cow, who launches an initiative to make Farmer Fred laugh. The animals try absurdity after absurdity: they perform impromptu acrobatics, wear Groucho glasses and, in the pigs' case, bark like dogs ("That's more weird than funny," Farmer Fred shrugs). Farmer Fred turns out to be one tough customer, meeting the animals' shenanigans with steely, W.C. Fields–caliber resistance. Egan's deadpan voice delivers maximum comic value, and his muted watercolors convey the animals' combination of shyness and hilarity; a shift of the eyebrows or a slight tilt of the mouth can betray a long-suppressed sense of humor. Yet this tale has heart as well as high jinks. When the animals decide to run away from the problem, Farmer Fred hurries after them: "Sure I'm serious, but that doesn't mean you have to be," he says. "And, besides, we're family.... I need you." Egan acknowledges the awkward but heartfelt exchanges of affection that so often pass between family members, as his characters, initially distant from one another, reach a warm and realistic understanding. Ages 4-8.