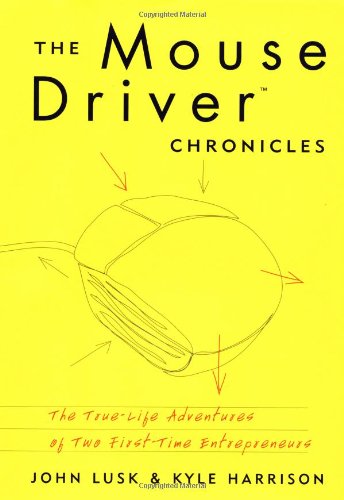 The MouseDriver Chronicles: The True-Life Adventures of Two First-Time Entrepreneurs

In this unconventional memoir, Wharton graduates Lusk and Harrison (actually, just Lusk; Harrison contributed only the epilogue) tell how they started a company the old-fashioned way: they had an idea, raised some money, then manufactured and sold their product. That product is the MouseDriver, a computer mouse resembling the head of a golf club. Not exactly an earth-shattering concept, but for Lusk and Harrison the product is almost beside the point. Their intent here is to show how, in an age of venture capitalists and "revolutionary" business models, it's still possible for non-dot-commers to start a company and make a buck. They founded Platinum Concepts Inc. in the summer of 1999 and set up shop in their shared loft in San Francisco, then a hi-tech boomtown. Obstacles in the beginning were legion: the first MouseDrivers were prone to falling apart; a typhoon almost wiped out their Hong Kong manufacturer; and retail inexperience caused them to miss the Christmas rush. But they persevered, and within 18 months had made $600,000 in sales and moved 50,000 units. Not quite GE, but not a failure either. The authors argue that almost anyone can achieve this kind of modest success; it just takes intelligence, determination and a good idea (although an MBA probably doesn't hurt). Though the book is occasionally less than enlightening (a blow-by-blow account of a Sony Playstation session is unlikely to help budding entrepreneurs), on the whole Lusk and Harrison provide solid, entertaining insights into how to start a business. This is a refreshing alternative to the recent wave of narcissistic dot-com memoirs.