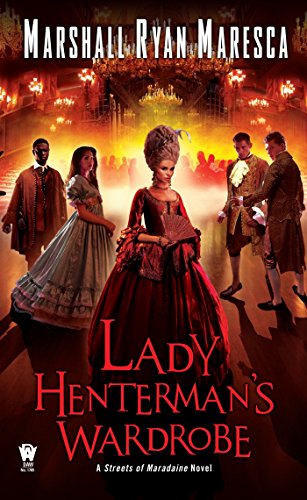 Maresca’s second Streets of Maradaine novel (after The Holver Alley Crew) features a complete and consistent fantasy world populated with lively characters. The denizens of the eponymous neighborhood have mostly recovered from the disastrous fire that was intended to drive them out. Though some have rebuilt businesses and moved on with their lives, others, like Asti Rynax, long for revenge. An investigation reveals that Lord Nathaniel Henterman, the Earl of Hinton Hollow, was behind the crime, but bringing him to justice will require more risk, as commoners can’t usually challenge nobles. Asti and his team plot to infiltrate Henterman’s household and find incontrovertible evidence of his participation in the fire. Liora Rand—Asti’s former partner, lover, and betrayer—is already there and playing a dangerous long game, undercover as Lady Henterman. Pulling this off means putting uneasy trust in Liora while Asti’s team questions his leadership. Meanwhile, a contentious local election and rival gangs cause trouble back home in Maradaine. Fans of the series will welcome this enjoyable return to its colorful setting. (Mar.)

Correction: An earlier version of this review incorrectly stated that one of the character's family had died in a fire. It also listed an incorrect title for the previous book in the series.