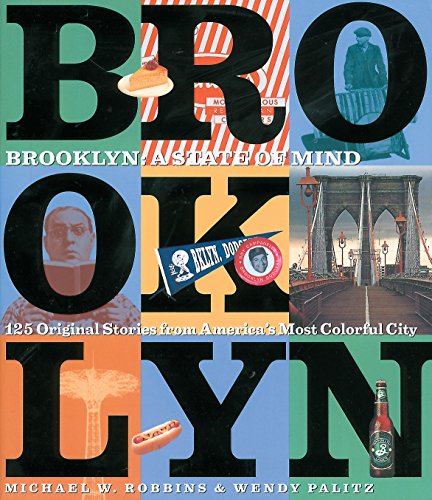 BROOKLYN: A STATE OF MIND: 125 Original Stories from America's Most Colorful City

With a disproportionate share of literati residing in Brooklyn, N.Y., the place has been the subject of plenty of books, from guidebooks to nostalgia-fests to coffee-table histories, but this handsome "illustrated collection of true and original stories about life in Brooklyn past and present" is unique. Contributors range from noted Brooklynites (Mel Brooks, Arthur Miller, Spike Lee, Susan Brownmiller) to savvy local journalists. "The Brooklyn state of mind is combative, wry, resilient," declares essayist Phillip Lopate, and the individuals who pass through—from Starbucks CEO Howard Schultz to handball king Joe Durso—illustrate the point. Predictable subjects like the Brooklyn Bridge and Junior's cheesecake are handled well, while less-storied subjects are also charming: the proprietor of Bargemusic (a local musical series held on, yes, a barge) and restaurants where one just might meet a made man from La Cosa Nostra. Short pieces covering the incorporation of Brooklyn into New York City in 1898, the preservation of architecturally notable Brooklyn Heights, the famous folk buried at Greenwood Cemetery and films made in Brooklyn offer a good grasp of the borough's history and institutions. Some subjects are slighted—why a timeline for the 20th century, but not the 19th, when Brooklyn was a separate city? And despite its protestations to the contrary, the book is permeated with nostalgia. Still, this rich compendium is a welcome contribution to anyone devoted to—or curious about—"the better borough." Photos, illus.