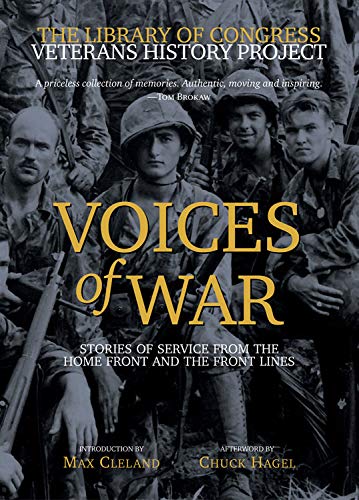 VOICES OF WAR: Stories of Service from the Home Front and the Front Lines

Chosen from among the more than 30,000 oral histories collected by the Library of Congress's Veterans History Project, these first-person impressions of some 60 men and women who took part in the U.S.'s most salient 20th-century conflicts—WWI, WWII, Korea, Vietnam and Desert Storm—come together to form a meaningful narrative. The object, editor Weiner notes, was "not to cover every engagement in each war, but rather to offer an impressionistic and intensely felt portrait of the ground-level soldier, slogging through the mud of France, the jungles of the Pacific, or the desert of Kuwait," and many other places in between. The book contains scores of brief entries organized by topic ("Under Fire"; "Coming Home") and war, enhanced by 175 color photos. Sometimes the flow constricts as narrators shift from doughboys in European trenches to Kevlar-helmeted infantrymen in the Kuwaiti desert, but the editors have chosen their testifiers well. As with any oral history, what we get are personal reflections, not historical syntheses. And with a foreword by Rep. Ron Kind, an introduction by former Sen. Max Cleland and an afterword by Sen. Chuck Hagel, there is plenty of veteran elected representation here, too.