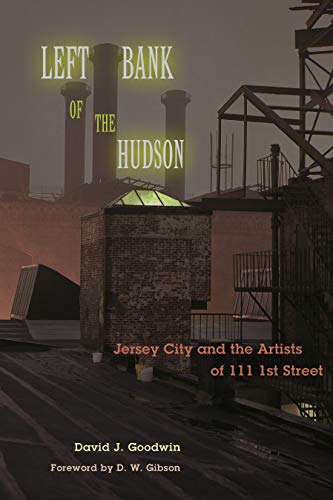 Left Bank of the Hudson: Jersey City and the Artists of 111 1st Street

A former tobacco-company warehouse turned artist colony in Jersey City, N.J., serves as a microcosm of American urban development in the age of globalization, in this local history of a single address by Goodwin, a librarian at Fordham University School of Law and former chairman of the Jersey City Historic Preservation Commission. In the 1980s a group of artists, priced out of their working spaces in Manhattan, set up shop at 111 First Street, on Jersey City’s once-industrial waterfront. Word of the building’s low rents and large spaces spread, and more artists moved in, planting the seed for a growing arts community amid the neglected warehouses of the area. Goodwin traces the evolution of the building up until its demolition in 2007 after a drawn-out legal battle to preserve the structure as a historic site. Drawing on interviews with resident artists, city officials, and community activists; archival research; and scholarly literature, the book reconstructs the story of one particular place and asks us to consider how it might shed light on wider trends. This close study of a specific arts community, forcibly disbanded, is useful both as an act of specific memorialization and as an exemplar of a wider phenomenon seen in cities across North America. (Oct.)

Correction: A previous version of this review incorrectly listed the book's title.