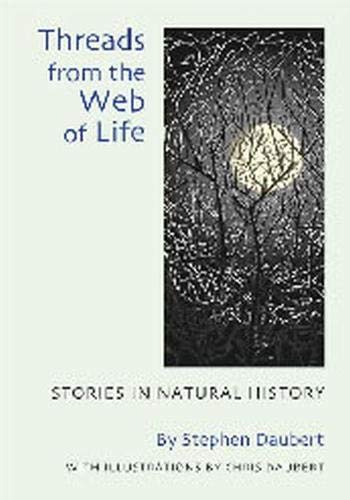 Threads from the Web of Life: Stories in Natural History

Daubert illustrates 16 ecological processes with lively narratives in which he envisions how it might feel to be at the center of the action: for example, traveling with a green sea turtle from its feeding grounds in Brazil to its nesting beaches 2,000 kilometers away on Ascension Island in the eastern Atlantic; riding whirling air currents with migrating American white pelicans; or fleeing from a predator swordfish with a school of neon flying squid. Some of the tales cover evolutionary events taking place over millions of years, such as the account of the tarweed plant that five million years ago made an ocean voyage from the Sierra Nevada Mountains to the Hawaiian archipelago, where it metamorphosed into the silver sword plant. Each of these happenings is a thread in the intricate web of life, and Daubert, a molecular scientist at the University of California, Davis, demonstrates that these threads are easily broken by humans, as when overkill by commercial whalers depletes a food source for creatures that feed on whale carcasses. His natural history tales are instructive and entertaining, and each is followed by an annotation explaining the science behind it. Illus. not seen by .