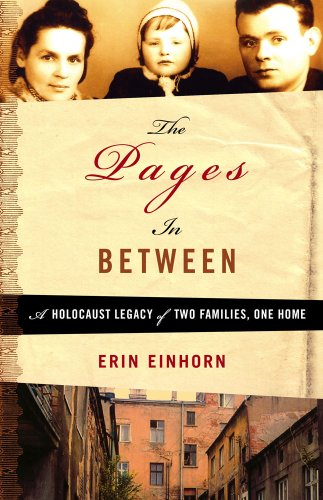 The Pages in Between: A Holocaust Legacy of Two Families, One Home

Journalist Einhorn's mother, Irena, was born in the Jewish ghetto of Bedzin, Poland, in 1942. A year later, as Irena's parents were being sent to concentration camps, her father made a deal with a Polish woman to hide Irena in exchange for his property. Irena's mother died at Auschwitz, but her father survived, and after the liberation met Irena in Sweden to go to America. As an adult, Einhorn decided to return to Poland to find her grandfather's house, hoping she might also meet the Polish woman who'd hidden Irena. As Einhorn worked on her family quest, she explored the somewhat surreal world of modern Polish-Jewish relations—from concentration camp tourism to faux-Jewish nightclubs featuring raucous renditions of “Hava Nagila.” Einhorn's earnestness serves her well in this beautifully told, genuinely inquisitive memoir; she insists on trying to “do right” by the Polish family who hid her mother, even if they only did it for money.