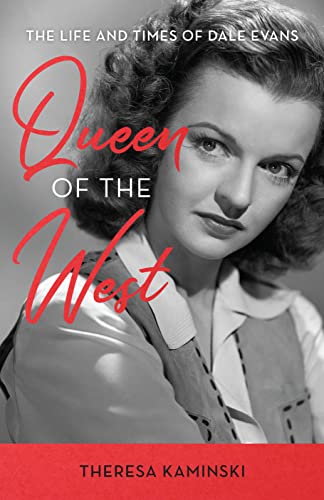 Queen of the West: The Life and Times of Dale Evans

History professor Kaminski (Dr. Mary Walker’s Civil War), a PW contributor, traces in this illuminating and definitive biography the remarkable life of American actor and songwriter Dale Evans (1912–2001). Born Frances Smith in Uvalde, Tex., Evans displayed her musical gifts from a young age, “burst[ing] into song at the drop of the hat” wherever she went. That charisma led to her first break, in 1929, when, while working for an insurance company in Memphis, her boss overheard her singing and offered her a spot on a radio show. After she was poached by a local NBC affiliate, Evans dropped her name for the catchier Dale Evans, began her swift ascent through the 1930s jazz music scene, and eventually landed in Hollywood, where, while performing on The Chase and Sanborn Show in the early 1940s, she met western star Roy Rogers, who would become her fourth husband. Drawing from archival interviews and correspondences, Kaminski provides engrossing glimpses into the obstacles Evans faced on her road to fame—from her two left feet (“Frankly, I can’t even do a time step,” she admitted during one audition) to her fraught home life, which was especially painful during the brief life of her daughter Robin, who died of encephalitis as a toddler. The deeply humanizing result restores an oft-overlooked yet influential 20th-century celebrity to her rightful place in music history. (Apr.)
close
Details