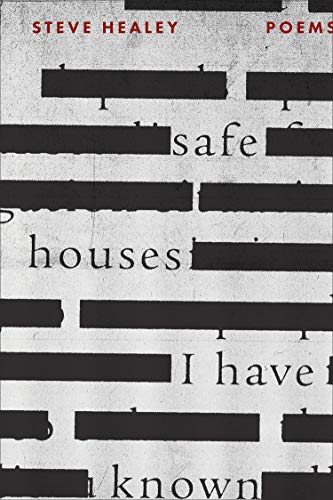 Safe Houses I Have Known

The singular third book from Healey (10 Mississippi) juxtaposes lyric strophes against striking erasures of white typeface on black pages. These poems include passages culled from CIA training manuals, a gesture that reveals the book’s interest in spectacle and spectatorship. As Healey’s speaker recognizes that “we were watched from outer space,” the reader, too, is implicated in the book’s portrayals of surveillance. Healey warns, “Everyone is a suspect./ Everyone is Colonel Mustard.” Pairing formal poetic lines with conceptually driven fragments, Healey carves a space for innovation within received forms. By blending personal narrative and found language, he evokes, and reverses, the power dynamics implicit in surveillance. In “I Can’t Say This to You,” he writes: “I fold laundry while/ a concealed camera moon watches me/ through the living room window folding/ my elbows and knees into neat stacks/ of body while eyeing the moon cookie/ waiting on a plate for me to eat it.” Here, the mechanism of surveillance becomes the object of scrutiny. The poems in this book rely heavily on the intrigue of the speaker’s experiences, while dramatic shifts in form add an additional layer of interest. (Sept.)

Correction: An earlier version of this review mistakenly identified this book as the author's second.