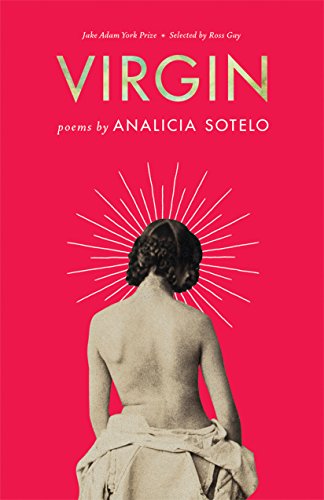 Sotelo explores the power of mythologizing personal history in her striking debut, winner of the inaugural Jake Adam York Prize. The collection is divided into seven sections—Taste, Revelation, Humiliation, Pastoral, Myth, Parable, and Rest Cure—and from the start Sotelo cultivates intimacy through moments of vulnerability. For example, in “Summer Barbecue with Two Men,” she writes, “Tonight, the moon looks like Billie Holiday, trembling/ because there are problems other people have/ & now I have them, too.” Each section is loosely themed; for example, in “Humiliation,” Sotelo deals with shame in a variety of situations, while the poems in “Pastoral” revolve around issues with a father figure. Familiar figures from Greek myths—namely Persephone, Ariadne, and Theseus— are recurring symbols that serve as a means to probe the darker sides of human behavior. In “Death Wish,” Theseus battles suicidal ideation and is later seen “bleeding from/ his head to his hands,/ like Christ without clear cause.” In the subsequent poem, he declares, “I’m only good/ at killing what I know, then taking off.” The book is also replete with novel images, as when Sotelo describes a heart as “a lake where young geese// go missing, show up bloody// after midnight.” With humanity and raw honesty, Sotelo finds fresh ways to approach romance, family, and more. (Feb.)
close
Details