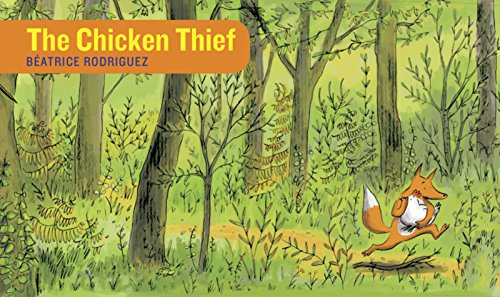 In Rodriguez's wordless debut, a bear and rabbit are enjoying a peaceful lunch in the garden outside their cottage when a fox makes off with one of their hens. Their rooster wrings his wings melodramatically, and all three give chase. The book's squat format and panoramic spreads help build the tension—and comedy—in the scenes that follow: the fox, on the right, is always a step ahead, while the bear, the rabbit, and the rooster trail behind, beating through forests or crossing a stormy ocean on the bear's belly. Rodriguez succeeds in creating a distinctive personality for each of the characters, and her ability to capture the players' emotions via body language is masterful. The tenderness with which the fox carries the white hen makes it clear early on that his intentions are not malicious, and the mood changes to one of romantic intrigue. Readers will find themselves simultaneously cheering for the happy couple and sympathizing with the rooster, who's crushed. For readers who love a good chase—and who doesn't?—this one is a delight from beginning to end. Ages 4–7.