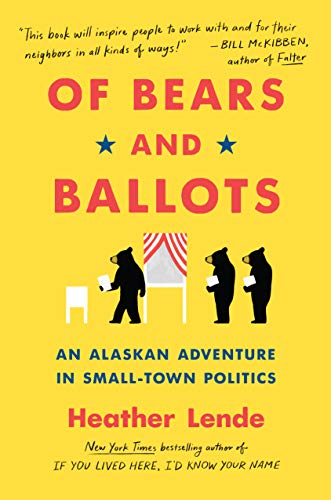 Of Bears and Ballots: An Alaskan Adventure in Small-Town Politics

Journalist Lende (Find the Good) delivers a detailed and amiable chronicle of her three-year term as assemblywoman in Haines Borough, Alaska, a municipality of roughly 2,500 people in the state’s southern panhandle. Frustrated by “the circus of national politics” and the “speak first, think later” approach of Sarah Palin and Donald Trump, Lende ran for borough assembly in 2016. She describes the Haines electorate as “violet with red and blue highlights,” and sketches the local, state, and national issues that matter most in the community, including climate change, the economy, a “multi-million dollar harbor expansion project,” gun rights, the town’s costly private dump, and declining oil revenues. After spending $1,000 on her campaign, Lende won with 501 votes, becoming one of two new members to the six-person assembly, where she encountered stiff opposition to her “relatively liberal politics,” including a contentious recall vote—an experience that led her to examine how gender stereotypes affect women in politics. Lende successfully balances the dry facts of assembly reports with humorous character sketches and lyrical odes to the natural beauty of Alaska. The result is an honest and inspirational investigation into why “it’s easy to say what’s wrong with government; it’s harder to fix it, and progress can be very slow.” Agent: Elizabeth Wales, the Wales Literary Agency. (June)
close
Details