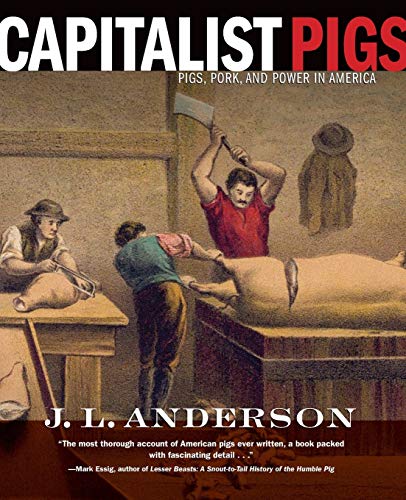 Anderson, a history professor at Mount Royal University in Calgary, Alberta, looks at the prevalence of pork and pork-related products in the U.S. in this comprehensive, sometimes stomach-churning volume. Before tracing the pork industry’s growth into “a modern, high-tech, multi-billion-dollar industry” that handles about 110 million animals annually, he examines pigs’ importance as a food staple throughout early U.S. history, for instance during the Civil War, when “food stability was as important to the Confederacy as gunpowder and lead.” During the early 19th century, he observes, large-scale pork processing thrived in Indiana, Kentucky, and Ohio, so much that Cincinnati was nicknamed “Porkopolis.” Anderson shines light on current exports, too, discussing how a $4.7 billion purchase by Chinese conglomerate Shuanghui International of Smithfield Foods, a major American pork producer, in 2013, indicated shifting power dynamics in favor of Asia. Throughout, Anderson’s investigation is thorough, focusing on economic and social impacts, and, when appropriate, unflinching, such as while reporting that people working on hog farms breathe in a dust composed of “swine skin cells, feces, feed, bacteria, and fungi.” The resulting book might be difficult for some to digest, but perhaps such is the nature of the beast. More than 50 illus. (Mar.)
close
Details