Our favorite books coming out this week include new titles by Dan Levitt, F. Perry Wilson, and Stephen Hunter.

The pick of our favorite books coming out this week include new titles by Dan Levitt, F. Perry Wilson, and Stephen Hunter. 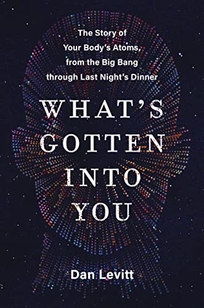 What’s Gotten into You: The Story of Your Body’s Atoms, from the Big Bang Through Last Night’s Dinner

Dan Levitt. Harper, $28.99 (400p) ISBN 978-0-063-25118-2
Documentarian Levitt sheds light on the tiniest bits of what humans are made of in his stellar debut. “Carl Sagan once famously said we are made of star stuff,” Levitt writes in his introduction. “This is the improbable story of how it happened.” Levitt covers the big bang, which led to the creation of “every particle in your body”; describes how elements are made within stars; outlines how the water that runs “through our veins” made its way to Earth (“humongous snowy dirt balls” are one theory, asteroids another); explains the nature of DNA; and extrapolates on how the food one eats “create[s] a living person.” Along the way, Levitt offers snapshot biographies of scientists: astronomer Cecilia Payne, for example, “transformed our view of how stars work,” and photosynthesis was discovered in 1779 by “a well-coiffed forty-nine-year-old Dutch physician and natural philosopher named Jan Ingenhousz.” The author claims that “to retrace the journeys of our atoms is to appreciate the world anew,” and his winning mix of astronomy, physics, biology, and chemistry will help readers do just that. This is marvelous. Agent: Suzanne Gluck, WME. (Jan.) 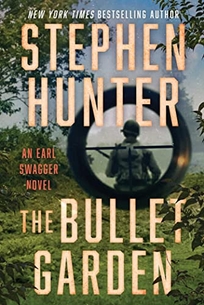 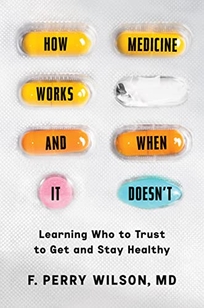 How Medicine Works and When It Doesn’t: Learning Who to Trust to Get and Stay Healthy

F. Perry Wilson. Grand Central, $29 (304p) ISBN 978-1-5387-2360-9
“The most powerful force in Medicine is trust,” writes physician Wilson in his standout debut. In recent years, thanks to a “seemingly unfeeling healthcare system,” the steady erosion of people’s trust in their doctors has pushed them, Wilson posits, toward “questionable medical practices” such as “cleanses” and miracle cures. Here, he does a fantastic job of fighting misinformation by explaining basic concepts in medicine and scientific research, and offering easy to digest explanations of biologic plausibility (“Is it plausible, within our current understanding of how the human body works, that eating celery reduces the risk of falls?”), correlation vs. causation, and the mechanism of randomized controlled trials. Wilson concludes with an impassioned plea for both patients and doctors: the former should “avoid believing something because you want it to be true or because it comes from someone you want to believe,” while the latter can help earn back patients’ trust by fighting for a reformed system that allows for more time with them. The result is a trenchant, empowering look at how to fix doctor-patient relationships. Agent: Howard Yoon, Ross Yoon Agency. (Jan.) 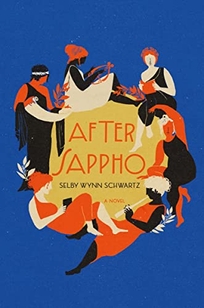 Selby Lynn Schwartz. Liveright, $28.95 (288p) ISBN 978-1-324-09231-5
Schwartz’s brilliant debut novel (after the critical study The Bodies of Others: Drag Dances and Their Afterlives) recreates the lives of feminists in the early 20th century. The collective first-person “we” narrator—a Greek chorus devoted to the female poet Sappho—weaves the stories of writers, painters, and performers who, like Sappho, are attracted to women and are determined to become their authentic selves through art. Many of the threads revolve around Lina Poletti, who thrives in her classical studies in Bologna despite Italian laws restricting the rights of women. She writes poetry and plays about women, and has romances with another writer, Sibilla Aleramo, who’d been forced to marry the rapist who got her pregnant; and the stage actor Eleonora Duse, best known for her portrayal of Nora in A Doll’s House. They, along with expat American writer Natalie Barney, poet Renée Vivien, and painter Romaine Brooks, carve out a place in European society during a time when lesbianism is ignored, not criminalized. Then comes WWI: Brooks and others drive ambulances at the front, Virginia Woolf begins writing about Cassandra, and Poletti writes war poems. At the war’s end, a British parliamentarian accuses an actor of lesbianism in the press, thus placing women’s sexuality under intense public scrutiny. As the chorus narrates, “we were plunged back into a history we had barely survived the first time.” Schwartz’s account of what happens next as the central characters resist oppression speaks volumes on their efforts, and she contributes her own work of art with this irresistible narrative. Schwartz breathes an astonishing sense of life into her timeless characters. (Jan.) 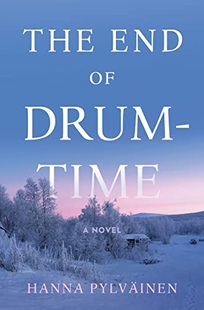 Hanna Pylväinen. Holt, $27.99 (368p) ISBN 978-1-250-82290-1
Pylväinen’s captivating latest (after We Sinners) follows the inhabitants of a tiny Swedish village in the Arctic Circle in 1852 as a pastor’s popularity begins to take off. Lars Laestadius’s church had been filling with Finns, Swedes, and native Sami who were drawn in by his wild sermons. Then, one day, Biettar Rasti, a former Sami shaman and prominent reindeer herder who’s now a drunk, interrupts a service with his own awakening on the church floor, which coincides with an earthquake. He leaves his herd to his son Ivvar and frequents the parsonage to learn scripture from Lars’s family, and Lars’s daughter Willa takes a shine to Ivvar. Ivvar, like his father, drinks and is indebted to the village storekeeper whose collection he avoids. Ivvar breaks things off with a Sami girl and begins spending time with Willa, and when Lars catches them kissing, she is shunned. Soon Willa sets off on sledges and takes refuge with the Sami, who along with Ivvar, are moving with their herds to the sea. By the end, a dean’s intervention into Lars’s temperance teachings and attempts to collect debts from the Sami culminate in tragic violence. With immersive details of Bible thumping and reindeer herding, the author evocatively captures two cultures and shows what happens when Christian mores collide with the customs of the remote Sami. This is transcendent. (Jan.) 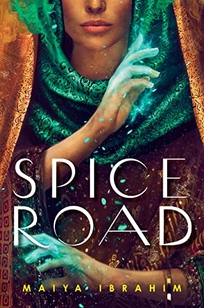 Maiya Ibrahim. Delacorte, $19.99 (464p) ISBN 978-0-593-12696-7
Ibrahim’s superbly written fantasy debut, the first in a series, follows 17-year-old Imani on a quest to find her missing, traitorous older brother. Imani is the youngest Shield in history, an individual who wields magic to combat djinn and other mythical beings threatening the safety of the hidden desert city, Qalia. But when her older brother, Atheer, flees with mystical Qalia secrets, labeling him a traitor, Imani’s reputation is tarnished. Though he’s assumed dead, when Imani discovers evidence that he might be alive, she must journey to the Forbidden Wastes to bring him home and secure Qalia’s secrets from the world beyond the city. With the help of a djinn named Qayn, Imani sets off with a group that includes her younger sister, Amira, and her nemesis Taha, 18, who believes Imani may facilitate Atheer’s escape. The further the group travels into the Forbidden Wastes, the more they learn about the real state of Qalia, and Atheer’s reasoning for running away. Imani’s introspective voice, rendered in Ibrahim’s lush prose, propels a deliberately plotted adventure populated by magnetic characters. Overflowing with culturally specific details and set in a fictional, Arabian-inspired world, this high-octane adventure maintains a steady clip toward a scintillating conclusion. Ages 14–up. Agent: Pete Knapp, Park & Fine Literary and Media. (Jan.) 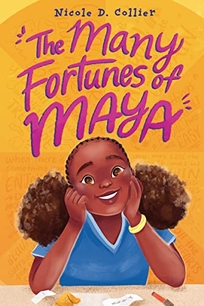 The Many Fortunes of Maya

Nicole D. Collier. Versify, $16.99 (240p) ISBN 978-0-358-43464-1
In Georgia, Black middle schooler Maya “MJ” Jenkins is a lot of things—a flautist, a soccer player, and a collector of fortune-cookie fortunes. Feeling that she had to choose between the instrument and the sport, MJ chose soccer (“Daddy’s favorite thing”). But she continues to secretly play the flute in her closet, employing what she calls “Quiet Mode” to engage with the music that centers her. She also regularly consults the Wheel of Fortunes her family made from fortune-cookie slips, spinning it for insight into life events. Most immediately, MJ hopes to be named her soccer season’s MVP, which would bring her closer to joining the club team on which her father once played. When MJ’s best friend wins instead, their bond takes a turn for the worse—just as her parents, who’ve been “whisper-fighting” for months, break the news that they’re separating for the summer. Beginning each chapter with a fortune, Collier (Just Right Jillian) delivers another immersive novel, and its emotionally tinged first-person voice offers fresh observations about parental tensions and changing friendship dynamics. Ages 8–12. Agent: Danielle Chiotti, Upstart Crow Literary. (Jan.) 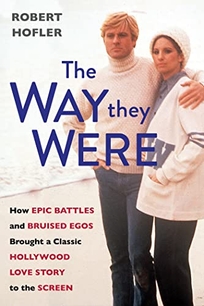 The Way They Were: How Epic Battles and Bruised Egos Brought a Classic Hollywood Love Story to the Screen

Robert Hofler. Citadel, $28 (288p) ISBN 978-0-8065-4232-4
Theater critic Hofler (Money, Murder, and Dominick Dunne) delivers a spellbinding behind-the-scenes look at the seminal 1973 film The Way We Were. When playwright Arthur Laurents pitched the idea for the movie to producer Ray Stark, the politically minded script was partly a way for Laurents to earn “sweet revenge” for the time he was blacklisted by the House Un-American Activities Committee. Hofler details Robert Redford’s initial reluctance to join the cast (“It sounds to me like another Ray Stark ego trip” he jokes), a hesitation that diminished when he discovered he’d be paid more than costar Barbra Streisand. Hofler recounts the clash of wills between Laurents and director Sydney Pollack that often threatened production—“Laurents thought he knew how to handle Pollack: he would listen politely to the director’s suggestions and promptly ignore them”—and holds nothing back as he describes tumultuous rewrites, delays, and the various players’ lofty demands (such as Streisand’s perfectionism and “questioning of every detail”). The ever-changing screenplay and forceful presence of two major stars created a difficult atmosphere, but despite “the day-to-day horrors of shepherding The Way We Were to the screen,” the film skyrocketed to fame. Hofler’s prose sparkles, and he successfully blends histrionics with on-screen magic. The captivating result makes clear that the drama happening behind the camera can be just as gripping as what’s in front of it. Agent: Lee Sobel, Lee Sobel Literary Agency. (Jan.)
ADVERTISEMENT
More from pw