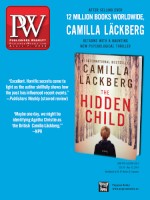 John Glusman, for Norton, bought world English rights to James Scott’s Hubris: General Douglas MacArthur and the Sack of Manila. The book is about the 1945 sacking of the city, a monthlong battle orchestrated by MacArthur, in which the U.S. fought alongside Filipino forces to end the Japanese occupation. In the battle, roughly 100,000 Filipinos died, and the city was devastated. Glusman said the fighting marked “one of the deadliest urban battles of World War II,” and, though sometimes called “the liberation of Manila,” the effort was considered by many as an unnecessary military action. Scott was represented by Wendy Strothman at the Strothman Agency, and the book is set for April 2017.

Rancic Gets Personal for Crown

Reality star and TV host Giuliana Rancic sold world rights to her memoir to Crown Archetype executive editor Suzanne O’Neill. Rancic is currently a co-anchor on E! News, and she also starred on a reality show with her husband, Bill Rancic, called Giuliana and Bill. The book will, Crown said, be an “inspiring” one, touching on everything from Rancic’s childhood growing up poor in Naples to her more recent (and public) battles with infertility and breast cancer. Rancic said of the book: “There are many things that my fans, my friends, and even my family never knew about my private struggle. I hope by writing this book and sharing my journey, I can be an inspiration to those facing their own personal turmoil.” Rancic was represented by Richard Abate at 3 Arts Entertainment.

Doug Wilson sold a biography of Hall of Fame catcher Carlton Fisk to Rob Kirkpatrick at Thomas Dunne Books. Wilson, who has also written biographies of baseball stars Brooks Robinson and Mark Fidrych, was represented by agent John Talbot. Kirkpatrick took North American rights in the deal, and the book is scheduled for fall 2015, timed to coincide with the 40th anniversary of Fisk’s famous home run in game six of the 1975 World Series.

Christine Pepe signed a North American rights deal with Reed Farrel Coleman to write four new novels in Robert B. Parker’s Jesse Stone series. (Parker died in 2010.) Coleman, an Edgar nominee, was represented by David Hale Smith at Inkwell Management, while Helen Brann, who has an eponymous shingle, represented the Parker estate. The first book in the deal, Blind Spot, is set for September 2014. Pepe also signed Coleman to a two-book, world rights deal that will launch a new series featuring a cop in Suffolk County, N.Y., named Gus Murphy; the first Gus Murphy book, Where It Hurts, is set for 2015.

Ania Ahlborn has signed a world English rights deal with Simon & Schuster’s Gallery Books imprint for three books and two e-novellas. Ed Schlesinger acquired the works from Inkwell Management’s David Hale Smith. Ahlborn self-published her novel Seed in 2011; Gallery said the author has since been dubbed by fans as “the female Stephen King.” After self-publishing, Ahlborn signed with Amazon Publishing, selling Seed and three additional novels to imprints at the division; her novel The Bird Eater was published by 47North this month.

Avery Gets ‘Wild’ With James

Abel James, the man behind the top-rated iTunes health podcast The Fat-Burning Man Show, sold a diet book to Avery. Megan Newman acquired world rights to The Wild Diet, which is set for a winter 2015 release. Avery said that James’s podcast is downloaded over half a million times each month; James also sells a range of branded apps and e-books via his own website. The book, the publisher added, will “show readers how to transform their modern diets to burn fat faster and lose up to 20 pounds in 40 days.” James was represented by Celeste Fine at Sterling Lord Literistic.

Debut picture book author Dev Petty sold I Don’t Want to Be a Frog to Frances Gilbert at Doubleday Children’s Books. The book, which will be illustrated by Mike Boldt, is about a frog going through, as publisher put it, “an identity crisis.” Sara Sciuto at Full Circle Literary represented Petty, while Boldt was represented by Jennifer Rofé at the Andrea Brown Literary Agency..

A version of this article appeared in the 04/07/2014 issue of Publishers Weekly under the headline: Book Deals: Week of April 7, 2014
TOC
ADVERTISEMENT
More from pw