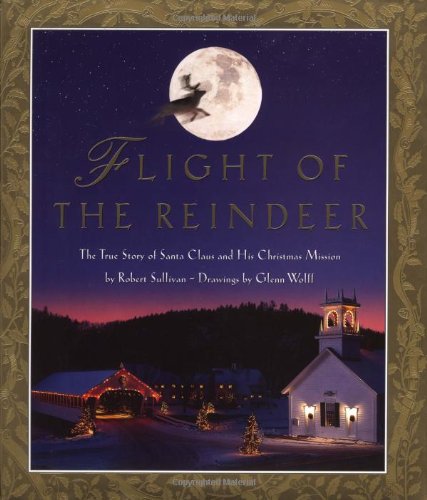 Flight of the Reindeer: The True Story of Santa Claus and His Christmas Mission

Will Steger, world famous as a Polar explorer, has written about his exploits in several books. Never before, however, has he revealed his most extraordinary adventure: his 1986 expedition to Santa Claus's village at the North Pole. ""Above us, gliding,"" Steger recalls to Life magazine senior editor Sullivan in this delightful, constantly surprising book, ""were a hundred reindeer--two hundred, five hundred! They coated the sky."" Steger isn't the only real-life celebrity or scientist here to confirm Santa's existence and to explain details of his ""mission."" From zoologist Tony Becchio, director of the Roger Williams Park Zoo (Providence, R.I.) and from Smithsonian writer Bil Gilbert, Sullivan learns of the little-known species of Rangifer tarandus pearyi, the flying reindeer from whose ranks are chosen the select few to pull Santa's sleigh. From former president George Bush, he learns that ""helping that fellow clear his airspace by signing the Santa Claus Clause was a great privilege of my office."" Sir Edmund Hillary lets on that, upon his ascent of Everest, he saw his companion, Tenzing Norgay, ""placing some cookies and some chocolates... in the snow."" The text is complemented by more than 100 full-color illustrations, including extraordinary photos of Santa and his reindeer caught in flight over Dartmouth, N.H. The wit here may soar over most kids' heads, but for adults this is a cheerful new Christmas classic. 125,000 first printing; major ad/promo; QPB selection; author tour; rights sold in Germany. (Oct.)
close
Details