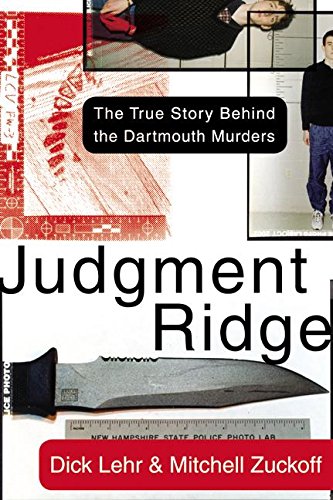 JUDGMENT RIDGE: The True Story Behind the Dartmouth Murders

In this meandering yet irresistibly absorbing book, Lehr (co-author of the bestselling , about a turncoat FBI agent) and Zuckoff (, about a Down syndrome child) recount the harrowing story of the murders of Half and Susanne Zantop, two beloved Dartmouth College professors who were savagely butchered in their home on January 27, 2001. The messy crime scene soon led investigators to James Parker and Robert Tulloch, a couple of popular teenagers from nearby Chelsea, Vt. But after being interviewed by detectives, the two promptly fled, leading authorities on a three-day manhunt that ended abruptly at a truck stop in Illinois. While the stunned and bewildered residents of Chelsea muscled their way through choking crowds of reporters (the already sensational story was made all the more lurid by the suspects' youth and the sleepy, idyllic setting) and came to terms with the unimaginable (two of their own townspeople were murderers), Parker and Tulloch were remanded to New Hampshire and arraigned on murder charges that were supported by an arsenal of incriminating evidence. Although the authors (Lehr supplies the grit and Zuckoff the sympathetic touch) assiduously reconstruct the events surrounding the pointless double homicide (Parker and Tulloch made off with a whopping $340), the authors appear to have been reluctant to omit any mundane detail or passing commentary, bogging down their energetic narrative in its own research. But the authors nicely expose the strange relationship between these two boys, their muddleheaded motivations for the crime, and Tulloch's arrogant and volatile personality, disregarded by his family and teachers as youthful exuberance when in fact it was the self-absorbed posturing of a burgeoning psychopath. 16 illus. not seen by .