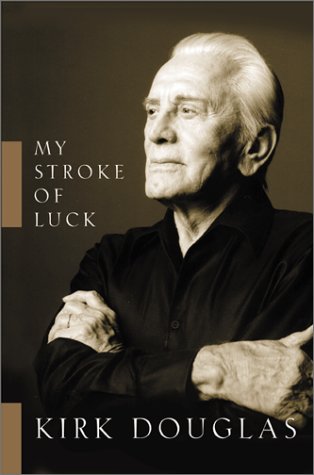 MY STROKE OF LUCK

One of Hollywood's brightest stars since the late 1940s (, ), Douglas embarked on a literary career in the 1980s, with his bestselling memoir . He suffered a debilitating stroke several years ago, and now, at 84, he offers the inspirational but not at all Pollyannaish story of his recovery. A peculiarly painful sensation in his right cheek was the first warning, followed by a bewildering inability to talk. Lying in a hospital bed set up in his home, Douglas felt his situation was hopeless. How could he be an actor and not be able to talk? He contemplated ending his life, but when he put a gun in his mouth and painfully bumped his teeth, he withdrew the weapon and began to laugh at his own dramatic gesture. Douglas recounts how he battled his depression not only with medical care but also by recalling happy memories (he shares reminiscences about Sinatra, Reagan and others), and he explains tips and exercises he learned from his speech therapist. Inspired by the courage of others who endured physical or emotional illness, Douglas began to overcome his fears. With the help of his supportive family (who refused to coddle him), he even returned to the screen in , playing a boxer who had a stroke. Entertaining and uplifting, Douglas's story is a lesson in survival, one that will entice readers whether or not they have had similar illnesses. B&w photos.