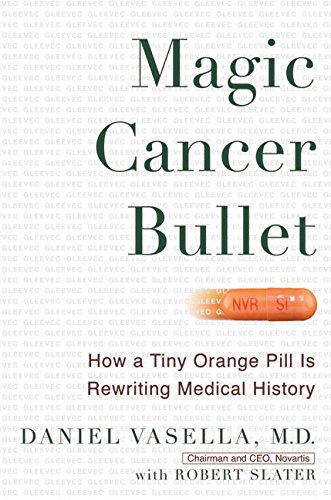 Gleevec is one of the few cancer drugs hailed as a breakthrough that, so far, has largely lived up to its hype. Vasella, the CEO and chairman of pharmaceutical giant Novartis (which manufactures Gleevec), and Slater () outline the development, remarkably successful clinical trials and accelerated production and approval process that led to the drug's speedy entry onto the market for the treatment of a rare cancer known as chronic myeloid leukemia (CML). Although the story's components—devoted scientists, risk-taking executives and activist patients—lend themselves to a gripping insider narrative, the book lacks the details and depth of feeling needed to make that story come alive. Repetition and stilted writing slow the account down further. As a result, the book reads largely as an extended press release for Novartis. Things begin to pick up toward the end, particularly when Vasella defends the high cost of the drug and discusses the challenge of managing patient, media and investor expectations. Gleevec may indeed represent a new direction for cancer research, but the excitement that fact should generate is not captured here.