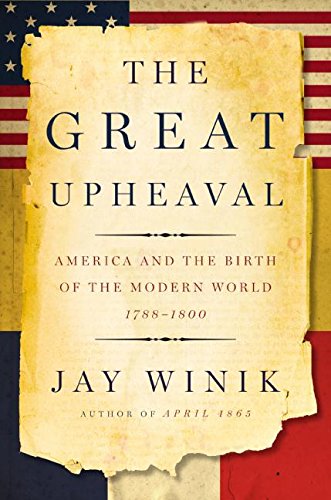 The years 1788 to 1800 must be numbered among the most tumultuous in history, as bestselling author Winik ( ) magnificently demonstrates in this aptly titled book. The nascent United States, tormented by three rebellions of its own, tottered as France descended into bloody terror and imperial Russia fought the Ottomans. Republicanism, liberalism, democracy, nationalism, as well as authoritarianism: all these potent ideologies, whose effects remain with us, sprouted from this fertile soil.

The emphasis on Russian and French affairs marks Winik as being in the forefront of a growing campaign to globalize America's national history: to view “the larger age” and frame the story as “one continuous, interlocking narrative” rather than to focus myopically on events in the United States. “The world then was far more interconnected than we realize,” Winik writes. “[G]reat nations and leaders were acutely conscious of one another.”

In this version, Washington, Jefferson and Adams no longer receive exclusive star billing, but instead share the stage with such greats as the Empress Catherine, the doomed Louis XVI, Robespierre, Napoleon and Kosciuszko. If there is a criticism to be made of this approach, it is that Winik has greatly underplayed the importance of Britain in the struggle for global mastery and the quest for international order.

Buttressed by impeccable research, vividly narrated and deftly organized, this is popular history of the highest order and is sure to create a stir in the fall market. 16 pages of b&w photos, 3 maps.