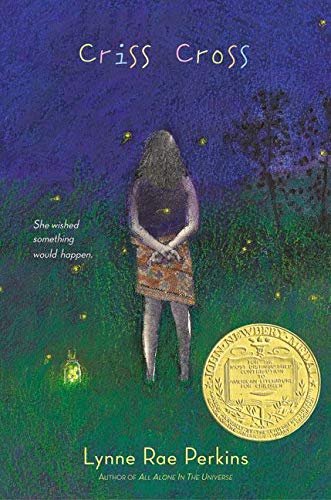 Through narrative that has the flavor of stream-of-consciousness writing but is more controlled and poetic, Perkins ( captures the wistful romantic yearnings of three friends on the brink of adolescence. There's Debbie, who makes a wish that "something different would happen. Something good. To me." There's Hector, who hears a guitarist and quite suddenly feels inspired to learn how to play the instrument. Then there's mechanical-minded Lenny who feels himself drawn to Debbie. The characters spend spring and summer wandering about their neighborhood, "criss crossing" paths, expanding their perspectives on the world while sensing that life will lead them to some exciting new experiences. (During a walk, Hector feels "as if the world was opening, like the roof of the Civic Arena when the sky was clear. Life was rearranging itself; bulging in places, fraying in spots.") Debbie forms a crush on a boy from California visiting his grandmother. Hector falls for a girl in his guitar class. Lenny hints at his feelings for Debbie by asking her on a date. All three loves remain unrequited, but by the end of the novel, Debbie, Hector and Lenny have grown a little wiser and still remain hopeful that good things lie ahead if they remain patient. Part love story, part coming-of-age tale, this book artfully expresses universal emotions of adolescence. Ages 10-up.