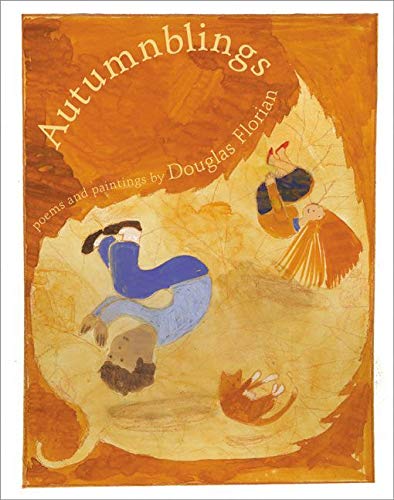 Similar to Florian's other seasonal collections, and , the wordplay in this fall bouquet of poems seem slightly worn, while repeated and obvious puns often strain for effect. For example, "What to Do with Autumn Leaves" instructs readers to " them"; the same pun recurs in "Symmetree" ("The leaves all leave") and in "Awe-tumn" ("Autumn leaves/ me in awe"). Similarly, the device of seeing the word "fall" displayed as if the letters were falling is less effective, as other poems recycle the same device. Florian's paintings, on the other hand, are fresh and childlike (e.g., the bite taken out of the apple shown for "Apple Picking" looks like a face in profile; a girl literally feels "Decembrrrr's freeze" in a portrait that turns her neck and chin into a thermometer). And at its best ("Naughtumn," for example, describes what happens "as autumn slowly gets winturned"), the wordplay can be as vivid as fall foliage. Ages 5-up.