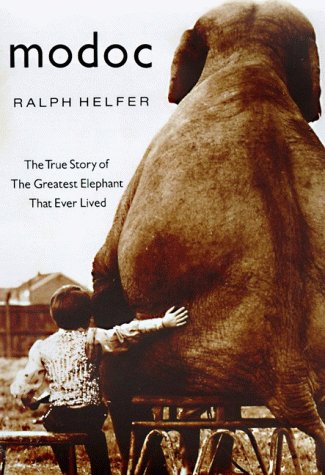 Modoc: The True Story of the Greatest Elephant That Ever Lived

A unique relationship between an elephant and man is related in this captivating tale from Hollywood animal trainer Helfer (The Beauty of the Beasts). Born on the same day in 1896, Modoc the elephant and Bram Gunterstein became inseparable companions. Bram's father was an animal trainer for a small German circus. When the circus was sold, the boy stowed away on its ship, which sank during a storm in the Bay of Bengal. Modoc and Bram were among the few survivors. The pair made their way through rural India, working in the teak forests. Then the circus owner reappeared to claim Modoc and to take Bram on as the animal's trainer. In America, Modoc enjoyed huge success. Eventually she was sold behind Bram's back, however, and vanished. Nearly 20 years later, partners in a company that supplied trained animals for TV needed an elephant on the cheap. They found one on a farm in the Ozarks, a filthy, emaciated animal covered with cuts and bruises. Her name was Modoc. The elephant responded to treatment and surprised her new owners by performing circus tricks. In time, Bram found his way to Modoc for a joyful reunion. Helfer's telling, packed with reconstructed dialogue, seems fanciful at times, and he is vague about dates. Still, sentimentalists and animal lovers should flock to this story. Photos not seen by PW. Foreign rights sold in the U.K., Germany, France, Holland, Finland, Japan and Italy; dramatic rights: Richard Curtis. (Oct.)
close
Details