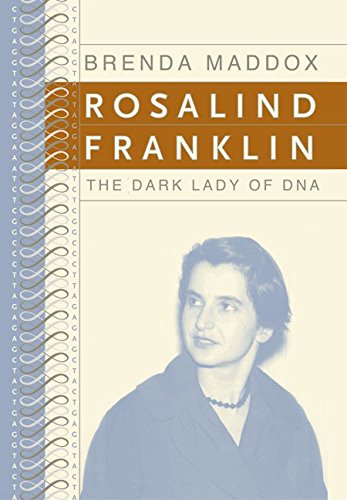 Her photographs of DNA were called "among the most beautiful X-ray photographs of any substance ever taken," but physical chemist Rosalind Franklin never received due credit for the crucial role these played in the discovery of DNA's structure. In this sympathetic biography, Maddox argues that sexism, egotism and anti-Semitism conspired to marginalize a brilliant and uncompromising young scientist who, though disliked by some colleagues, was a warm and admired friend to many. Franklin was born into a well-to-do Anglo-Jewish family and was educated at Newnham College, Cambridge. After beginning her research career in postwar Paris she moved to Kings College, London, where her famous photographs of DNA were made. These were shown without her knowledge to James Watson, who recognized that they indicated the shape of a double helix and rushed to publish the discovery; with colleagues Francis Crick and Maurice Wilkins, he won the Nobel Prize in 1962. Deeply unhappy at Kings, Rosalind left in 1953 for another lab, where she did important research on viruses, including polio. Her career was cut short when she died of ovarian cancer at age 37. Maddox sees her subject as a wronged woman, but this view seems rather extreme. Maddox () does not fully explore an essential question raised by the Franklin-Watson conflict: whether methodology and intuition play competing or complementary roles in scientific discovery. Drawing on interviews, published records, and a trove of personal letters to and from Rosalind, Maddox takes pains to illuminate her subject as a gifted scientist and a complex woman, but the author does not entirely dispel the darkness that clings to "the Sylvia Plath of molecular biology."