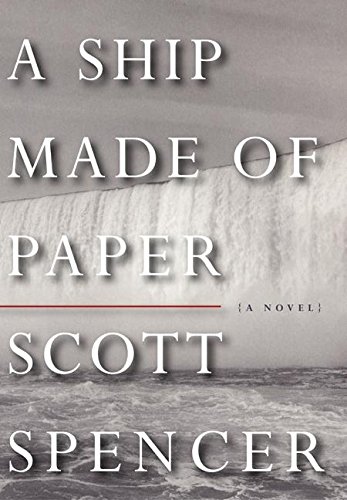 A SHIP MADE OF PAPER

Spencer's latest novel should cement his reputation as the contemporary American master of the love story. Daniel Emerson is a New York City lawyer who has returned to his hometown of Leyden, N.Y., a picturesque Hudson Valley village, with his girlfriend Kate, a novelist, and her daughter, Ruby. Kate drinks and obsesses about the O.J. Simpson trial instead of writing fiction. Daniel finds himself falling in love with Iris Davenport, an African-American grad student at the local university. Iris is married to Hampton Welles, an investment adviser. The book records Iris and Daniel's affair from both perspectives and poses the question, is their fleeting happiness really worth so much ruin? For ruin there is a-plenty: Daniel thoroughly humiliates Kate, destroys his financial status, becomes a subject of gossip in the village and inadvertently mauls Hampton in an accident with a roman candle, making it almost impossible for Iris to leave him. Spencer is an unerring writer. He describes the two couples at a local concert: "From time to time, Kate must glance at Daniel. His eyes are closed, but she's sure he's awake. Hampton takes Iris's hand, brings it to his lips, while she stares intently ahead. And then, Kate sees Daniel glancing at Iris. Their eyes meet for a moment, but it has the impact of cymbals crashing. It is a shocking, agitating thing to see. It's like being in a store with someone and watching them steal something." Kate's violated sense of order is captured in perfectly chosen metaphors. This book, in which matters of sex and race are treated with unusual frankness, could well be both the critical and commercial surprise of this spring season.