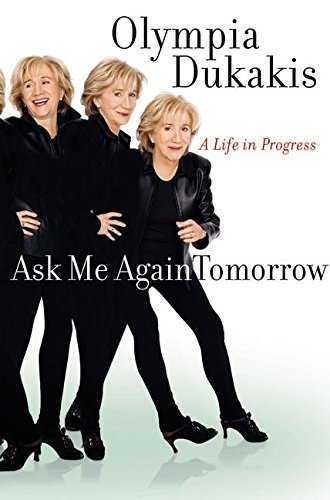 ASK ME AGAIN TOMORROW: A Life in Progress

Who can forget Rose Castorini, the feisty Italian mother Dukakis played in 1988's Dukakis won an Academy Award for her performance and went on to star in , and other films. But most viewers are unaware of Dukakis's laudable stage career of more than 40 years (she's appeared in over 125 productions). In this uplifting autobiography, the first-generation Greek-American recounts her life and work. Dukakis—born in 1931 and a cousin of one-time presidential hopeful Michael—grew up in Lowell, Mass. She and her brother, Apollo, staged plays in the backyard while their parents worked difficult factory jobs. After high school, Dukakis wanted to pursue acting seriously and figured the best way to do it was to make a lot of money doing something—it turned out to be working as a physical therapist—and then moving to New York to act. And that's exactly what she did. Battling low self-esteem, feelings of sorrow and rejection, and facing ethnic and gender biases, Dukakis eventually made it as an actor and, in 1973, launched a theater company with her husband in New Jersey. Playing Rose in changed her life ("Just a few weeks before I had been clipping coupons and shopping for bargain jeans, while working 10 to 12 hour days at the theater. Now I was checking into the Four Seasons"). Although the memoir leaves a few questions unanswered and Dukakis's prose is sometimes vague, this is still a fine portrait of a hardworking, dedicated, proud and inspiring woman, by turns affecting and laugh-out-loud funny. Photos not seen by .