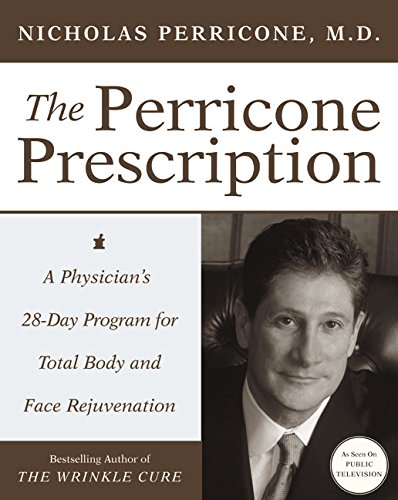 THE PERRICONE PRESCRIPTION: A Physician's 28-Day Program for Total Body and Face Rejuvenation

Perricone (), a professor of dermatology at Yale Medical School, believes that relatively simple changes in eating can effect dramatic changes in physical appearance and well-being. He has created a month-long program—broken up into daily menus—as well as a more restrictive three-day regimen designed to produce immediate results. Perricone's guiding principle, which he explains in some depth, is to reduce inflammation at the cellular level, which, he believes, causes the skin to age and is also linked to degenerative disease. Perricone suggests that protein and some fat is essential for everyone. He is particularly keen on the benefits of fish. Certain foods high in carbohydrates—cereals, breads, bananas—are taboo in this plan because of their high glycemic index; they cause a spike in blood sugar and prompt the body's insulin response, which stores rather than burns fat and causes inflammation. Perricone also recommends an exercise regimen, and nearly a third of the book is devoted to a discussion of antioxidants, vitamin supplements and creams. Some may question his nutritional theories, and others may find the diet difficult to stick to, with its almost total restriction of starchy foods. Still, Perricone is a proponent of Barry Sears's , and readers who have followed that book and Perricone's own bestselling earlier volume will probably appreciate this one.